hyiq.org - The home of the Floyd "Sparky" Sweet Replication Project!

We have been studding in fine detail the Vacuum Triode Amplifier of Floyd "Sparky" Sweet for over a decade now. On our path of discovery, we learnt a lot of very important concepts, some were provided by the greats as hints. Mostly not making an aounce of sence at the time, but with understanding, and knowledge we now know the importance.

We have studied for many years the concepts we have learned, and now are trying to share with you, the average public, what we have learned. Join our Forum to see what we are doing!

Here at hyiq.org, we focus on Hard Data! Where can Provable Hard Data lead us? Well a long way! What we have learnt over the course of the last decade or so, is now showing up in the experiments of other researches! Have you ever heard of Partnered Output Coils? Many have today!

The House of Energy

Nature is the Ultimate, and Science, as it was at its inception, was to understand Nature! We were given the Ultimate Gift at the time of Creation:

There was, there is, as we find, only three of the creations as is given, matter force and mind.

Three things, the absolute most powerful things given at the time of Creation! Science's job to understand all three.

Partnered Output Coils are NOT a new concept! We have done our homework on this, as we always do, and it turns out they are everywhere! All the greats used them! All of them! See our: Support Section! They may not have known at the time, and many have said:

I have no Idea how it works, but it does!

We are the world leader in research of Energy Machines, for the public, to advance the public, for freedom of the people! We are here because we care. 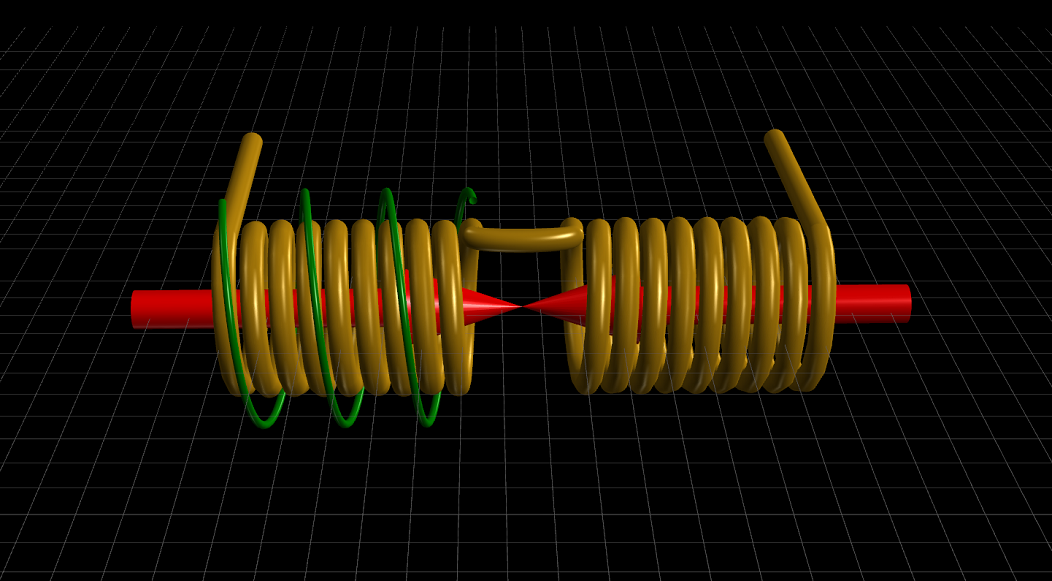 Mass is Energy, compressed by C2, which is the Speed of Light2

We must regard it rather as an accident that the Earth (and presumably the whole solar system) contains a preponderance of negative electrons and positive protons. It is quite possible that for some of the stars it is the other way about.

All Mass or Matter that contains Elementary Charged Particles is therefore a Source of Energy! As stated by Einstein's Mass Energy Equivalence, Energy that can be Pumped by Magnetic Fields that change in time!

A Copper Atom has 29 Protons, 34 Neutrons and 29 Electrons, a ton of Charge in just one Atom! Imagine a small piece of Copper, say one cubic centimetre, several billions of Atoms, imagine all that Charge! So what do we do with it, how do we use it?

Science already knows how, but has never properly investigated Michael Faraday's Law of Electromagnetic Induction. In our path of research, we have found some that have made progress, but none have properly investigated this further. George I. Cohn is one brilliant man, making a lot of progress.

Knowing Electromagnetic Induction is great, but seeing a problem, and then accepting this problem as an unbreakable Law of Science is a totally different thing!

Baltic German physicist Heinrich Lenz was credited with his formulation of Lenz’s law, a simple addition to Faradays Law, this formulation is a Negative Sign in today's understanding, simply adding: - to the Equation of Electromagnetic Induction.

One Equation for Faradays Law of Electromagnetic Induction, is: E.M.F = -NdPhi/dt

Lenz's Law introduced a mindset of Symmetry, this gives us the term: "Equal and Opposite" forces in Nature we commonly refer to.

Interestingly, this brings us to Sir Isaac Newton.

Newton's first law states that every object will remain at rest or in uniform motion in a straight line unless compelled to change its state by the action of an external force. This is normally taken as the definition of inertia. The key point here is that if there is no net force acting on an object (if all the external forces cancel each other out) then the object will maintain a constant velocity. If that velocity is zero, then the object remains at rest. If an external force is applied, the velocity will change because of the force.

The second law explains how the velocity of an object changes when it is subjected to an external force. The law defines a force to be equal to change in momentum (mass times velocity) per change in time. Newton also developed the calculus of mathematics, and the "changes" expressed in the second law are most accurately defined in differential forms. (Calculus can also be used to determine the velocity and location variations experienced by an object subjected to an external force.) For an object with a constant mass m, the second law states that the force F is the product of an object's mass and its acceleration a: F = m * a

The third law states that for every action (force) in nature there is an equal and opposite reaction. In other words, if object A exerts a force on object B, then object B also exerts an equal force on object A. Notice that the forces are exerted on different objects. The third law can be used to explain the generation of lift by a wing and the production of thrust by a jet engine. - Nasa

Although Sir Isaac Newton is correct, most all seems right, do you think this is complete? Is there a chance this is not complete?

It is this, the Law I have not seen or read about, other than knowing bout its existence, that we take advantage of. It is this that gives us efficient Systems, using Asymmetry!

Humans do not like SURPRISE, slow, gradual acceptance, is a key in the adoption of anything new.

It is very much easier to dismiss new technologies, as an individual error, than it is to accept the positive results of the majority.

Positive and Negative Forces exist, as with each Force, Humans are driven in similar directions, thinking they are right and just, having reasons for what they do. Not thinking about weather, what they do is Negative or Positive for the Human Race!

It is true: “There was, there is, as we find, only three of the creations as is given, matter force and mind”, and the greatest thing ever given to any individual, is their very own Mind! The only requirement is it be used, determination and Inner guidance, conquers the greatest problem!