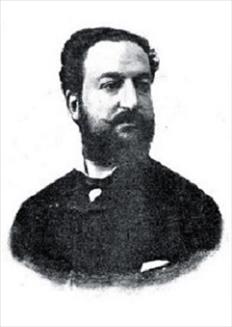 None we know of

"Mr. Clemente Figueras of Las Palmas, Canary Islands, is credited with having invented a contrivance which generates electricity without the use of any intermediate motive power or chemical reaction, but simply gathers the force from the atmosphere. The report of the invention comes from the Daily Mail correspondent at Las Palmas, who says Mr. Figuera has one of his machines in successful operation in his house."

PRINCIPLE OF THE INVENTION

Because we all know that the effects that are manifested when a closed circuit approaches and moves away from a magnetic center are the same as when, this circuit being still and motionless, the magnetic field is increased and reduced in intensity; since any variation , occurring in the flow traversing a circuit is producing electrical induced current .It was considered the possibility of building a machine that would work, not in the principle of movement, as do the current dynamos, but using the principle of increase and decrease, this is the variation of the power of the magnetic field, or the electrical current which produces it.

The voltage from the total current of the current dynamos is the sum of partial induced currents born in each one of the turns of the induced. Therefore it matters little to these induced currents if they were obtained by the turning of the induced, or by the variation of the magnetic flux that runs through them; but in the first case, a greater source of mechanical work than obtained electricity is required, and in the second case, the force necessary to achieve the variation of flux is so insignificant that it can be derived without any inconvenience, from the one supplied by the machine.

Until the present no machine based on this principle has been applied yet to the production of large electrical currents, and which among other advantages, has suppressed any necessity for motion and therefore the force needed to produce it.

In order to privilege the application to the production of large industrial electrical currents, on the principle that says that “there is production of induced electrical current provided that you change in any way the flow of force through the induced circuit,” seems that it is enough with the previously exposed; however, as this application need to materialize in a machine, there is need to describe it in order to see how to carry out a practical application of said principle.

This principle is not new since it is just a consequence of the laws of induction stated by Faraday in the year 1831: what it is new and requested to privilege is the application of this principle to a machine which produces large industrial electrical currents which until now cannot be obtained but transforming mechanical work into electricity.

Patent filed while living in Barcelona (1908)