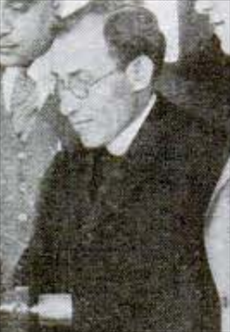 None we know of.

An Italian Jesuit priest from Brazil announced here yesterday that he had invented a motor that makes use of "interatomic" energy to generate many times the power it receives originally from an electric battery. The motor is now at Washington, where it is undergoing the Patent Office investigation.

The priest is the Rev. Antonio d’Angelo, S.J., a stocky, earnest little man who combines missionary work in Brazil with tinkering in his own electrical laboratory. He speaks no English, but told of his machine through his brother, Biagio d’Angelo of 1475 LeLand Ave., the Bronx.

Father d’Angelo became interested in electricity 20 years ago when he was a student at a Jesuit seminary in Naples. A year and a half ago he was sent out by his Order to Brazil to carry on missionary work at Ribeirao Preto among the Italian emigrants. He had to get a special dispensation from Bishop Alberto Gonzales of Ribeirao Preto to visit the United States where, so his brother had written him, fortune comes more easily to the man with a money-saving device. He came here in November 1927, and has urged his Bishop to extend his leave of six months.

The missionary priest does not believe in the Hendershot "fuelless motor".

"I challenge anyone", he said yesterday, "to use the magnetic field of the earth for running a motor. The energy from that would be too small".

His motor, he said, could be used in the home to supply electric lighting cheaply, and even heating. He said that it could be used to run trains, airplanes and automobiles.

Father d’Angelo had a plan of his motor with him yesterday. He showed how it started to develop energy from an electric battery, and how this original impulse worked on the machine to generate many times its power through the "electricity produced by the inter-atomic energy of the ions".