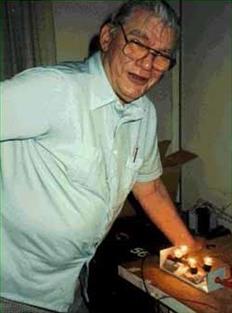 The Oscillator, The Space Quanta Modulator, later renamed to the VTA by Tom Bearden

The 19th of May, 1986, was the first reported successful experiment of Floyd Sweet, then just called the 'Oscillator', later renamed to the 'Space Quanta Modulator' and later renamed to the 'Vacuum Triode Amplifier' by Tom Bearden. The now famous 'Vacuum Triode Amplifier' is shrouded in mystery! Everyone has a different Storey!

Experimental proof cant be debated. We have already shown that some theories on the VTA were wrong and Experiment can very easily prove this. The developmental progress of Floyd Sweet's VTA can be viewed as progressional. This means that as time goes on, with the developmental progress of the VTA, improvements were made. Huge differences from Generation One VTA to Generation Six VTA can be seen. If youre not familiar with the paper "Nothing is Something by Floyd Sweet" then I recommend you have a read: Click Here

We know of Six Generations of the Sweet VTA or Space Quanta Modulator:

Floyd "Sparky" Sweet died on July 5th, 1995 of a heart attack, leaving behind a legacy now known as the VTA. The VTA has not been resurrected to this date as far as we know. We are continuing our efforts to replicate the VTA but it’s a long tough road to travel due to so much not being known about the VTA and so much information being flat out wrong. From all our research, we can only make educated guesses on the actual method of operation. We do however have more facts today than we did when we started the project.


Floyd Sweet was a case where a lot of documentation does exist! The big problem, much is simply false, stories made up either by Floyd Sweet or an interpretation of from someone that did not understand what Floyd Sweet was actually saying!

Anyone that has not done their homework, Magnet Conditioning was a Fraud, a Red Herring!!! It was a massive Smoke Screen to throw people off what Floyd Sweet was really doing. It does, however, become very clear what Floyd Sweet was doing after reading the following papers!


Floyd Sweet had a single goal in mind! In his words:

The current and potential windings require relatively little power, and are applied in such a manner that rate of flow of moving charges may be accelerated beyond 1 ampere = 6.2418 electrons⁄second. Thus the duty factor of the copper changes. I2R Losses diminish and more charges drawn from the now coherent space field flow at a faster rate as current to the load. This means as more current is required by varying loads more feedback magnetomotive forces free more electrons from binding forces complimented by potential magnetic forces of the orientated, coherent space field. Thus a conductor that formerly had a temperature rise above ambient labelled as a factor of 10 would now operate at a temperature of 1.0. Thus the same gauge wire would carry 10 times more current at the same temperature.


There is beauty in Logic! Common-sense tells us that Electromagnetic Induction is being Turbo Charged! There is an Increase in the actual Flow of Electrons, Current (I), as compared to what we would normally see!


How though? Well Floyd Sweet also tells us this also! Its actually very easy, very simple and again Logical!

Current is deemed as a quantity or number of charged particles moving from P1 to P2 in time t, or as the charge transferred in one second by a current of one ampere. The coulomb is the charge on 6.24 x 1018 electrons. Electric fields are due to the presence of charges. Magnetic field effects are due to the motion of charges. Current is the net rate of flow of positive charges. This is a scalar quantity.


Make no sense? Please do the MrPreva Experiment! This will show you all!

I would like to send special thanks to Patrik for the help in transcribing some of the following documents! Thank You Patrik!