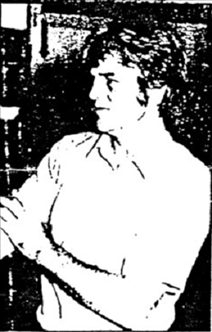 The invention has a patent pending, and LEM3 development corporation was formed in 1982, and a batch of California capital stock has been sold. What’s more, Mollinet says he is not the only one with the fuel-free idea. He claims that about 10 other inventors across the country are also racing to develop similar use of energy created through the magic contained within a magnetic field --- the same magic that fascinates every child who has ever picked up a magnet and wondered about its invisible attraction when held near a refrigerator.

As Gene Mollinet sits patiently working away in his shop, cars rumble by outside spewing exhaust the machine he has developed may someday make a thing of the past.

Elsewhere, officials and county planners sit in plush board rooms bickering over the size and number of oil rigs they'll soon add to the string already snaking down the Santa Barbara Channel. Still, Mollinet works, the machine taking shape among the Goleta inventor's clutter. He looks up, his Maui-tanned skin wrinkled from squinting at the tiny electrical parts and wires which make up his machine. His shirt, well, it's a mess. His hair, it's a mess too. Unkempt, with little education beyond high school --- he's a stereotypical inventor. Mollinet has a hard time explaining to someone as poorly versed in electronics as I am exactly what he is building or how it works.

The machine, he says, makes useable electric energy without using any fuel. It is as simple as that. It is started with a regular car battery, but after the battery is unhooked, the "Power Unit" keeps running until he turns it of. It is called LEM3, and he plans to put it in a plane and show the world what it can do by taking a 5-day spin around the world using no fuel.

A bit far-fetched? Mollinet is dead serious. The invention has a patent pending, and LEM3 development corporation was formed in 1982, and a batch of California capital stock has been sold. What’s more, Mollinet says he is not the only one with the fuel-free idea. He claims that about 10 other inventors across the country are also racing to develop similar use of energy created through the magic contained within a magnetic field --- the same magic that fascinates every child who has ever picked up a magnet and wondered about its invisible attraction when held near a refrigerator.

Mollinet never lost that fascination, which heightened as he was flying P51s for the Air Force during the Korean War. He pulled apart a plane radio one day, and received a strange shock from one of the crystals used to latch onto radio frequencies. The crystal, e surmised in all innocence, was either storing energy or building its own. Coupled with a magnetic field, similar crystal substances will be used by Mollinet to keep the plane itself in the air, and without using any fuel.

[N.B.: I was told that Mollinet used a junction of Pb-FeS in a magnetic field to produce power after initial excitation by a battery. --- R. N. ]

In addition to the plane unit on which Mollinet is currently working, he has already completed a solid state electrical generator which powers a car, and a mechanical home generator. He bets his bottom dollar on the plane, though.

The grand plan is to go to Stead Air Force Base in Nevada where the corporation has leased a hanger, and spend the month of January modifying a Cessna 152 fuselage to house the LEM3. By spring, Mollinet says, the plane will be ready for an air flight which could revolutionize the entire power production field.

Mollinet admits all of this seems a bit strange. As every high school physics student has learned, the laws of thermodynamics say a machine cannot under any circumstances create more energy than it uses. So what gives? “It doesn’t deny those laws”, he says, “it adds to them”.

For obvious reasons, Mollinet won’t say a whole lot about what it does add to physical laws. What he does say is that it something to do with gyroscopic particles which orbit in a magnetic field to produce electricity [N.B.: compare Joe Newman’s gyroscopic theory. --- R.N.]. In the plane’s power unit, the electricity produced will be used to build up pressure in a hydraulic generator which turns the propeller. That’s it.

From under a pile of blueprints and aviation magazines Mollinet pulls out a San Francisco Examiner article from November about a man with a similar power unit [N.B.: Probably Joe Newman]. The man has been turned down by the US Patent Office for a patent on a machine similar to Mollinet’s “I’m way ahead of this guy”, Mollinet says. “His machine is, well, it’s primitive”, he adds, telling the story of how he already secured a patent pending on his device two years ago by showing officials just blueprints and providing them with an explanation of his theory. “When I went in there at first, I myself only had a suspicion that it worked”, he said.

In the newspaper article, a Sperry Univac official is quoted as saying that “the future of the human race may be drastically uplifted by the large scale development of this invention”. Mollinet says he understands the implications of his machine, the changes it could bring, and he says that if he has his way, the world will also soon be dealing wit those implications. He insists his story will not end with an oil company buying out his product and shelving it. “This won’t be squashed”, he says.

Understandably, Mollinet has a hard time getting people to accept the fact that he really does have a prototype unit which he uses to energize the television he watches. “People think how can a little guy in his shop in Goleta do it when all the big guys like Santa Barbara Research and Raytheon can’t do it?”, he says. “Compared to the immenseness of what we have, the public interest in this has been piss-poor”.

A show displaying Mollinet’s solid state home unit, the car and the mechanical generator was held in August at the Earl Warren Showgrounds. The show’s lighting and amplification were powered by the LEM3 unit. About 125 people showed up. He has received offers to buy his company, he said, but is waiting until after he makes the air flight --- until he proves undeniably that the unit does what he says.

The plane now sits in the Nevada hangar with its wings detached He is going to replace the wings’ fuel tanks with hydraulic fluid reservoirs, and with water tanks --- we’ve got to have something to drink up there for 5 days”, he says. After that comes the installation of the power unit, and a small fan at the rear of the plane for power reciprocation. The test flights begin at the end of January. At that point he plans to embark on the trip already plotted out on a world map hanging on a cluttered wall of his workshop.

It all seems like a fairy tale, a fantasy of sorts, but Mollinet is all business as he pulls out the blueprints for the plane and the unit and explains everything in electrical jargon; he’s dead serious when he hauls out his corporation papers and stock certificates explaining how the corporation was formed.

When he walks across his shop to a little metal box in the corner wit the words LEM3 Power Unit printed on it, hooks up the battery cables, flips a switch, unhooks the cables and then plugs in a television, and the picture flickers immediately to life, it’s much easier to swallow.

At this point all one can do is stand there, and try to imagine the ramifications of such a machine and what it could do for us all.

Over 150 people attended the event, viewing what Mollinet claims is a unit which puts out electrical power without using any fuel, and without giving off any exhaust.

The solid state model, shown above, was used during the show to power a television set hooked up to a computer.